With Snowdown approaching the League of Legends Live Client, I have been playing the new “Showdown” game type on the PBE.  I absolutely love the 1v1 game type that Riot has introduced, and will explain why.

Blind Pick after bans, both players can be the same champion. 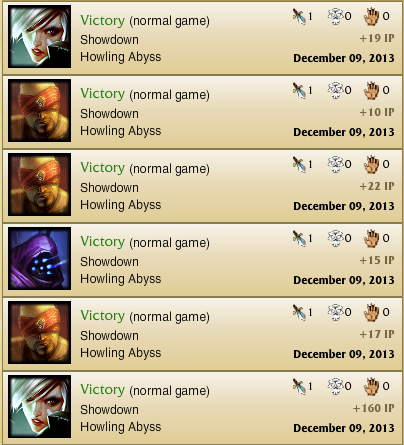 As you can see there are three ways in which to win a game of Showdown.  The most fun way to win in my opinion is to kill the enemy champion.  I enjoy playing early game champions with fast paced kits, so I mainly play Riven and Lee Sin.  Unfortunately, these champions are usually banned, so I tend to try out a lot of random champions.  Thresh and Blitzcrank were both quite fun, as was Sion and Dr. Mundo.  Showdown is a really great place to try out different champions and test out how they do in low level duals.

My favorite part about Showdown is the ability to capitalize on your opponent’s mistakes.  You don’t need to worry about the enemy midlaner or jungler coming into your lane at any point in the game, so you can control the game however you want.  If your opponent makes a mistake you have the ability to take full advantage of the game and dictate what the opponent can and cannot do for the next few minutes.  If at any point they would put themselves into a situation where they could possibly be killed, you can take that opportunity to finish the game.  I have won countless games at level 3 because of bad positioning and the false sense of security that many players have.  If at any point you see a chance to get a kill, you can go in without fear of being ganked.  The entire game is up to you, which is what makes it so fun for me.

Another thing that I love about Showdown is how fast paced it is.  Sometimes I don’t even look at the minions and just wait until I have a chance to either trade very well or get a quick cheesy kill at level 2 after they burn their abilities on the wave.  Lee Sin and Riven are both great for this early game strategy.  Sometimes I win games without even touching the minion wave.

My main suggestion for Showdown is to bring Flash with you.  Many people go fully aggressive with Ignite / Exhaust or Ignite / Barrier.  This can work, but against aggressive players like Riven who will try to all in you early it doesn’t help.  Anytime I see that the enemy doesn’t have flash and I do I know that I can force a fight, and if it is a favorable fight I will be able to chase them down with flash and end the game.  It is also great for surprising your opponent with an engage that wouldn’t be possible without the quick blink across the screen towards them.  I tend to run Flash / Ignite in every match-up.

Make rune pages!  Remember that you don’t need to worry about a lot of the threats from Summoner’s Rift, and you also don’t need to try to scale to late game.  Focus on winning the game early, and adjust your Masteries and Runes accordingly.  Make sure to create a few rune pages with and without Magic Resist, as a lot of the champions used in Showdown do not deal magic damage.

This is your chance to really improve your laning skills as well as testing the limits of a champion.  I already feel a lot more confident in 1v1 situations because of Showndown, and I will only get better as I practice more and expand my champion pool.  This is also a great place to test out unfavorable match-ups and trying to cheese your way to victory with a quick, smooth play before the opponent can even react.  Focus on your strategy in Showdown, watch for mistakes, work on your mechanics, and have fun!